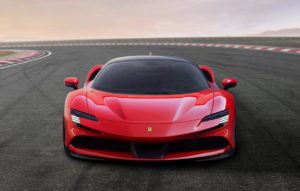 We should probably start with the most important part of the Ferrari’s newest model, the engine. The SF90 Stradale gains its 986bhp from a combination of Ferrari’s award-winning twin-turbo V8, producing 769bhp, and three electric motors – one between the engine and gearbox at the rear of the car, and two on the front axle – that gain their power from a 7.9kWh lithium ion battery and offer 216bhp.

It’s worth noting that, whilst we’ve seen Ferrari’s twin-turbo V8 a few times, this one has been significantly updated. That means increased capacity from 3920cc to 3990cc, a completely redesigned intake and exhaust and a narrower cylinder head. Aside from that, Ferrari has also equipped the SF90 Stradale with a smaller flywheel and an exhaust manifold made from something called ‘Inconel’.

Controlling the way that the ICE and hybrid motors work, the steering wheel mounted Manettino has been redesigned and renamed the ‘eManettino’. Using this, the driver has access to four different driving modes: eDrive, Hybrid, Performance and Qualify.

eDrive puts the SF90 into electric car mode, offering 15 miles of electric-only driving and a top speed of 84mph. Hybrid is the car’s standard setting, using clever systems to switch between electric and combined energy depending on the situation. Performance keeps the combustion engine and hybrid motors running at all times, giving immediate access to all the power. Qualify mode puts everything into overdrive, using all of the car’s horsepower, draining the battery and creating epic speed.

Excitingly, Ferrari say that SF90 Stradale is capable of completing an entire lap of the infamous Nurburgring whilst at full beans in qualify mode (not their wording). They did also note that the mode switches off any form of regenerative charging and rinses the electricity in the battery; but, when you’re after lap times, that’s not an issue.

As with all new Ferraris, a new version of Side Slip Control (SSC) has been implemented; this time, it’s called ‘eSSC’. The new system oversees the distribution of torque to the wheels, the new electric traction control (eTC) system and new brake-by-wire tech. Aside from taking care of braking, the latter also manages regenerative braking whilst coasting.

Keeping the SF90 Stradale stuck to the road, active aerodynamics and a drag reduction system (DRS) have been implemented in an expert way which only Ferrari are capable of. Arguably the most interesting of these aero elements is the rear wing that consists of a fixed section (which has the center brake light on it) and a ‘shut off Gurney’ that retreats electronically into the body of the car. Combined with the latest iteration of Ferrari’s vortex generators and various other aero elements, the SF90 Stradale generates 390kg of downforce at 155mph.

Styling wise, the exterior has been designed to combine modern aerodynamics with various throwbacks to signature Ferrari features, such as the highly structured flying buttresses. Whilst there may be various throwbacks to Ferrari’s gone-by the exterior feels like something completely new; in fact, it almost feels like some kind of Ferrari concept and 330 P3/4 cross. Glorious, isn’t it?

The cabin has also been subject to a complete reworking; featuring equal parts classic Ferrari design and modern technology. The steering wheel is the focus in the cabin, giving control over pretty much everything – it is actually incredible that they’ve managed to fit more things onto the steering wheel. The central bridge housing the driving controls has also been reworked into a metal plate that sits where the beautiful open gate shifter used to sit in old Ferraris; it’s stunning and a fitting nod to their past.

According to Ferrari, their new 900bhp, concept-styled, hybrid supercar bridges the gap between the 812 Superfast and the existing LaFerrari but sits way below the latter’s replacement that we can expect in 2022. Which is an exciting concept – how can something with this extreme performance, incredible power and the latest technology sit ‘way below’ something else? We’re excited to find out.