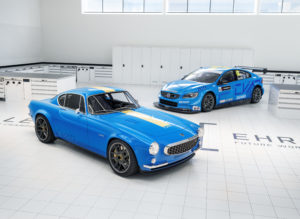 Regardless of your opinion on the various new restomods that have been appearing over the last year, you can’t deny that the thought of a racing car engine in a stunning retro Volvo is pretty cool. That’s exactly where the painstakingly beautiful Volvo P1800 Cyan comes in. Here’s everything that we know about this new road going touring car.

First of all, let’s start with the basis of this extreme Volvo restomod. It started life as a 1964 Volvo P1800 before being fully restored by Cyan Racing and then modified to bring it into the modern ages. What does that mean? It means that it now has bigger wheels, a wider track and a steel and carbon fibre reinforced body.

But that’s not all! Cyan Racing have also updated everything underneath, to make this new P1800 handle like a dream. That means that, where the original P1800 had a live rear axle, this restomod now has double wishbone suspension upfront, aluminium uprights and two-way adjustable dampers all round. Boosting the new handling characteristics even more, Cyan Racing have opted to add a limited-slip differential into the mix as well.

Last but not least, stopping power comes from a set of new big disc brakes with four-piston calipers. That’s all you have stopping you, however, as there’s no ABS, brake boosters or even traction control to help you out.

Wondering why they’ve added a big brake set to the new P1800 Cyan? Well, it’s because the engine sitting under that bonnet is the exact one that took the team’s S60 TC1 touring car to the WTCC title in 2017. That’s right, it’s a racing car engine. Producing a total of 414bhp and 336lb ft of torque, the 2.0-litre turbocharged four-cylinder is said to create a “linear power and torque curve with the characteristics of a normally-aspirated engine”.

Whilst Cyan Racing haven’t mentioned how quickly their P1800 will get to 62mph, we imagine it’d be pretty rapid, especially when you consider that the thing weighs just 990kg. It’s probably also incredibly fun … as 414bhp being fed to the rear-wheels with no real driving aids always promises to be.

When they talk about their new project, Cyan Racing say that it represents how they imagine their race car would have been had they been operating a racing team back in the sixties. We like Cyan Racing and we like their beautiful new P1800.