Bloodhound LSR is up for sale … Again 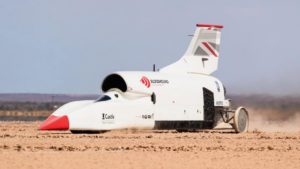 Bad news, everyone: the Bloodhound land speed record project is once again struggling and is back up for sale. After previously being saved by Ian Warhurst two years ago, the project once again requires funding if it is going to break the 800mph target.

Just in case you aren’t familiar with Bloodhound, it’s basically a team of UK experts aiming to break the land speed record of 763mph that was set by Thrust SSC in 1997. Despite public interest, the project has faced multiple financial problems, nearly ending in 2019 before being rescued by Warhurst.

Since being saved, Bloodhound has managed to complete an incredible run in South Africa, hitting a top speed of 628mph on just its Rolls-Royce EJ200 jet engine. The next step would be to fire up the additional Nammo rocket motor and hopefully break the land speed record.

The problem is, however, that the project needs funding to do that. You see, when Warhurst took over the project, he allocated enough funding to achieve the goal of reaching north of 600mph and hoped that sponsorships and other methods of alternate funding would help to continue the project after that. Sadly, that didn’t happen. Then, a global pandemic hit and compounded the issue further.

Speaking to Top Gear, Warhurst explained that without immediate funding the project can’t continue and, seen as that funding isn’t happening, he has no choice but to put Bloodhound back up for sale. With enough sponsorship (or a wholesale purchase), Warhurst is hoping that they can break the world land speed record as soon as next year!

Fancy swooping in and putting your name on the car that could break the world land speed record (according to Warhurst, all the hard work has been done)? Well, now is your chance! We really hope that someone gives Warhurst a call soon!